In our area, people often confuse the paper wasp (Polistes) with the yellow jacket (Vespa) and hasten to kill either one that they see, for fear of stinging and of damage to their honey bees.

However, the paper wasp is a beneficial pollinator, typically not aggressive. As pollinators, no wasps are as efficient as bees due to their shiny, smooth bodies that lack the the bee’s “fuzz” for attracting and holding pollen grains. Nonetheless, polistes adults live on pollen and nectar, and collect a few caterpillars only to feed their larvae.

This wasp makes a small paper nest open at the bottom like an umbrella for a family group of dozens of workers with one queen.  It does not attack bees, and rarely stings humans–but be smart! Don’t fool around with its nest, in any case!

Yellow jackets, in contrast, are aggressive and will sting multiple times with venom. They make a closed paper nest underground, or inside a log, in a wall, or under eaves, with a queen and thousands of colony members. They kill adult bees and brood, scavenge dead bees, and rob nectar and honey from the hive.

They are not totally “bad,” of course–they serve important, beneficial roles in the ecosystem as predators on a variety of destructive insect pests such as beetle larvae and flies, and as pollinators.

However, you are right to be cautious of yellow jackets for your own safety and that of your bees!

Yellow jacket nests concealed underground, often in old rodent burrows, are a greater hazard for stings to human passers-by, especially in late summer, because they are so inconspicuous with just the comings and goings of wasps to mark the spot.

Similarly, nests inside walls or logs reveal only an entry hole, and the paper nest is hidden from view.

The final confounding aspect of this topic seems to be distinguishing any of these yellow-and-black wasps from their domestic or feral relative, the honey bee (in an evolutionary sense, bees diverged from the ancestral predatory wasp over 120 million years ago) .

Honey bees, unlike wasps, do not have a thin waist or long slim legs. They are fuzzy, typically with black to amber colors rather than yellow, and often carry round baskets of pollen on the hind legs.

They are typically NOT aggressive except in response to rough intrusion into the hive. If a honey bee stings, its stinger remains in the puncture and the bee dies.

Domestic colonies are housed in apiary hives that may each contain 30- to 60,000 bees; feral colonies are usually found in tree cavities, hollow logs, sometimes in attics or walls of buildings, but never underground.

Our EJBees Swarm Coordinator (see the “REPORT A SWARM” section of the blog) receives many phone calls from people claiming to have a swarm of honey bees in their yard or home, but many (or most) of those turn out to actually be yellow jacket nests.

Similarly, people who report that they’ve been badly stung when they “stepped on a beehive on the ground” have also mistaken yellow jacket wasps for honey bees.

But You, dear reader, now have The Scoop: henceforward you can distinguish wasp from honey bee, and “good wasp” from “bad” …… and shall watch where you step!

Happy Halloween month! In October, the queens should be slowing down their brood production, but unusually warm weather seems to have encouraged them to keep on laying the full quota of eggs. A drop...

It still feels like summer, but winter is coming.  In the garden, tall autumn sunflowers are opening, cosmos and marigolds continue their glorious bloom, fall asters are coming on, but other... 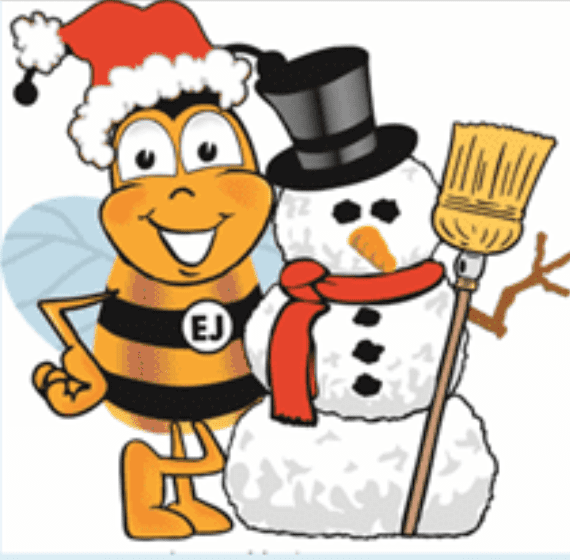