She has no golden slippers, no dainty foot-ornaments to show her royal rank, nor even an occasional pedicure. Nonetheless, the honey bee queen has precious and fragile feet.

The tiny claws on the final segment of each foot are vital to her ability to grip the rims of comb cells to position herself properly for laying one precious egg in each prepared chamber.

If a foot is damaged, you may see her limping over the wax comb with one lifted, useless leg. Without six functional feet, she cannot perform the most fundamental and vital task of her daily life: providing eggs to populate the hive.

Consequently, the beekeeper who is the ultimate caretaker of the queen, notwithstanding her bee-retinue within the hive, must at all costs protect her all-important claws and foot-pads from harm.

In particular, whenever the queen is caged for transport or for isolation, the handler must take care never to touch the screen where her feet may be clasping.

Even when she arrives in a small mailing container after a long, dry trip, the beekeeper should not smear water over the mesh to provide her a drink, as is often prescribed.

Instead, just carefully shake a drop or two onto the screen surface…. don’t risk crushing the royal tootsies.  If that should happen, it would deny her the role as mother of all the bees in her colony and subject her instead to early supersedure and untimely demise.

Like all insects, honey bees have three pairs of legs, with a foot (tarsus) at the end of each limb.

Each bee foot is made up of five tarsal segments, or “toes,” set in a linear arrangement below the tibia, like this: >>>>> in contrast to the setting of our own five toes in a side-by-side array, like this: ^^^^^.

Shown here is the left hind leg of a queen bee, with a dashed bracket marking the five segments of the foot: one large segment at the top followed by four small ones.

The last segment at the tip holds the pair of claws and a sticky, soft foot pad.

In honey bees, each of the six feet has the same structure and function no matter whether it is the foot of a queen, a drone, or a worker.

For walking, the claws are used to tread on rough surfaces and to grip the rims of comb cells. The sticky foot-pad (empodium) is for walking on smooth or slippery surfaces and for depositing pheromones.

The next drawing shows detail of the fifth tarsal segment: the claws and the foot-pad, which protrudes as a lobe forming the absolute tip of the queen’s foot from which pheromones are released through pores.

Like all honey bees, the queen leaves her fragrant footprints wherever she walks.

The scent of Her Majesty’s pheromone trail is thought to inhibit the construction of queen cups in the hive, thereby suppressing queen-rearing and accordingly, swarming.

In contrast, the chemical message left by workers as they step through their daily tasks has a different meaning altogether. It essentially attracts nestmates to enter the hive, or to visit certain flowers or water sources, or to gather at locations of group activity in the hive, such as where comb is being drawn.

Experiments during swarming season revealed that in a normally populated queenright hive, the queen’s daily routine includes walking over every part of each frame she visits—of course, leaving her scent-message like a dotted line on the comb all along the way.

However, conditions of overcrowding in a such a hive prevent the queen from visiting the bottom comb edges where swarm cups are typically constructed.

Once the inhibitory message is no longer reinforced by queenly footsteps in those areas, workers start building the special cups for producing new queens (Lensky & Slabezki 1981).

Most of these cups will never be used for that purpose, but they are created now and then all through the spring and summer “just in case.”

If something does happen to the queen such that she can no longer fulfill her role, workers will move a fertilized egg into a cup and bathe it in royal jelly. With special diet and care, a new replacement queen will develop in the special cell, which is gradually elongated by workers to accommodate a large larva.

The reigning queen’s age makes some difference to the strength of her queen-cup inhibiting message. A 6-month-old queen’s tarsal glands secrete much more pheromone to mark her trail than do those of a 2-year-old monarch.

Hence, the suppression of queen cup construction may decrease as the queen gets older.

With a dozen different compounds secreted by the pheromone-producing glands in the queen’s feet, there could be additional messages transmitted.

For example, both observation and experiments have shown that colonies with freely moving queens have more comb-building activity overall than those with the queen confined or limited in their ability to roam the hive (Gilley 2001).

In contrast to the queen’s 12- and the worker’s 11-compound pheromone from the feet, the drone’s footprint contains just one single component, and the message it conveys to others has not yet been discovered.

But when the queen’s feet speak, the whole colony listens! 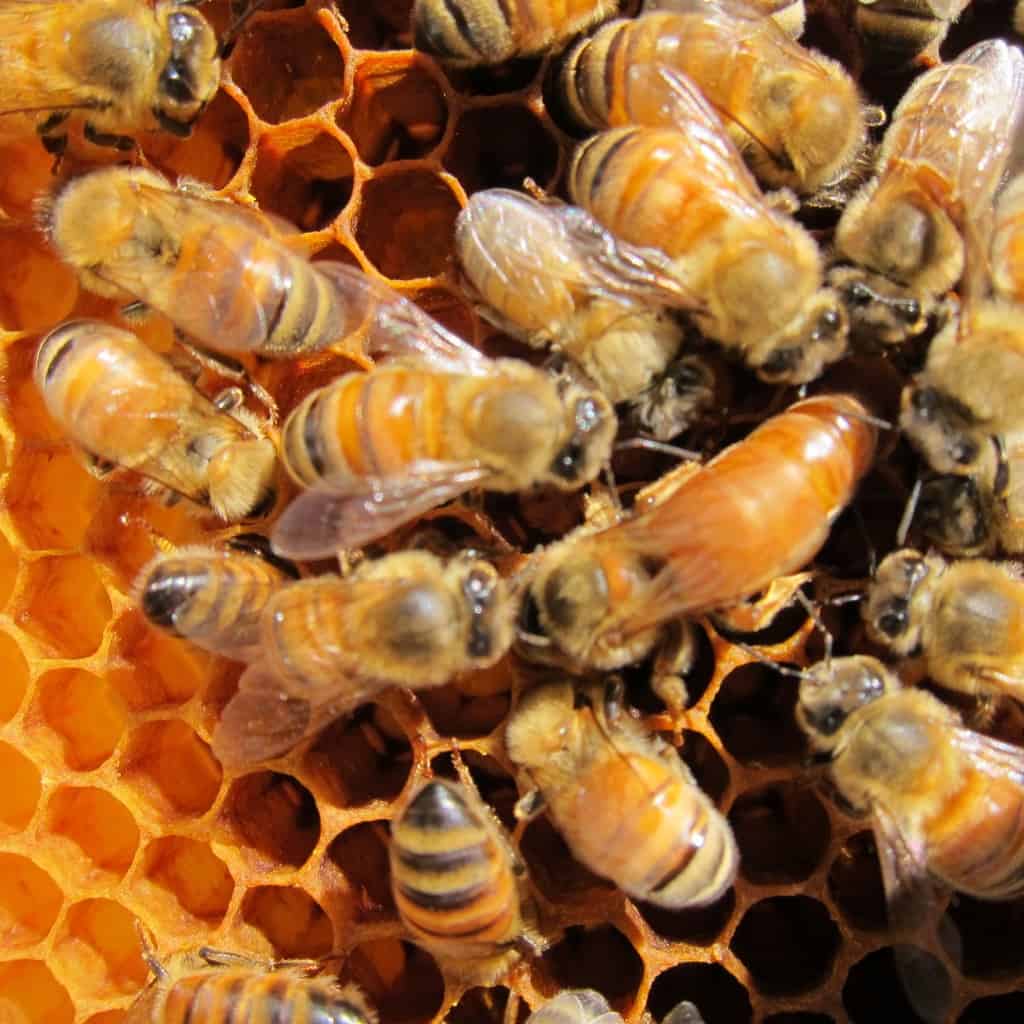